Principal Parker Moore (Washington, DC) was quoted in a March 22 article in Law360 titled "Bat's Newly Endangered Status Could Limit Many US Projects” discussing a proposal from the U.S. Fish and Wildlife Service (FWS) to uplist the northern long-eared bat from threatened to endangered status. According to Parker, if finalized, this move will make it much harder for projects and activities east of the Rocky Mountains to clear Endangered Species Act (ESA) reviews.

FWS’s proposed endangered listing for the species responds to a 2020 federal court ruling finding that FWS’s 2016 threatened listing for the northern long-eared bat suffered several defects. Although the court directed FWS to redo the listing decision for the bat, it did not vacate the defective threatened classification so that the species would continue to receive ESA protections while FWS completed its work. In addition, the court left in place a special 4(d) rule that FWS had issued along with the threatened listing of the bat, which narrowed the ESA’s prohibition on species harm to only activities involving cutting trees known to be occupied by the bat or impacting caves in which the bat was known to be hibernating.

That 4(d) rule greatly benefits the regulated community by allowing FWS to complete a programmatic consultation that significantly streamlined ESA reviews for any project requiring a federal permit. However, special 4(d) rules are available only for threatened species, meaning that the streamlined review process and the project development benefits it provides would be eliminated if FWS finalizes its proposed endangered listing for the northern long-eared bat.

As Parker explained to Law360 “[w]ithout the exemptions, there's going to be a much higher bar to clear for projects within the bats' range.” Developers will either have to work under the assumption that the bats are present in the area or conduct a survey to prove they aren’t.

"The problem on top of that is that the Fish and Wildlife Service is not issuing new survey guidance at this time, although they said that they're going to," Moore said. "So if you wanted to do surveys for the species, you don't have an approved protocol for doing that that you can rely on."

But Parker noted that there are several problems with FWS’s new proposal that could form the foundation of a legal challenge should the agency move forward with an endangered listing. For example, FWS’s proposal relies on winter population counts of the bats where biologists go into caves to assess populations. That is problematic, he explained, because in guidance issued when the species was listed as threatened, FWS did not allow project proponents to rely on cave surveys to determine the presence or probable absence, because of the "difficulty and low confidence in visually detecting their presence."

"So it rings a little bit hollow for them to, on the one hand, say that qualified, permitted bat biologists that work for consulting firms aren't capable of determining whether or not bats are present, but yet that's the same data that primarily drives an endangered listing here." 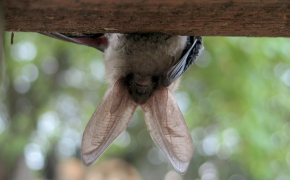