Named an American Lawyer Litigator of the Week in March 2021, Eric is an environmental litigator in the Boston office of Beveridge & Diamond, with a national practice representing major companies and municipalities in complex litigation under the Clean Water Act, the Safe Drinking Water Act, CERCLA, RCRA, FIFRA, the Clean Air Act, and their state analogues. His practice encompasses environmental and mass torts, class actions, state and federal enforcement actions, and federal citizen suits under all major federal environmental statutes. He has handled cases in state and federal courts throughout the United States, litigating civil and commercial matters before juries, trial and appellate courts, arbitrators, and administrative tribunals.

Superfund litigation is a major part of Eric’s docket; he has led litigation teams at some of the most significant CERCLA sites in the United States, including sites in and around Los Angeles, Portland Harbor, and Onondaga Lake near Syracuse, New York.

Eric also recently helped lead teams in the successful defenses of two of the most significant environmental citizen suits in recent years – a $4 trillion Clean Water Act suit filed against a major U.S. transportation company, and a landmark Safe Drinking Water Act suit against the City of Newark, New Jersey, for alleged lead in drinking water, for which he was recognized as Litigator of the Week by AmLaw Litigation Daily.

Eric is a veteran trial lawyer, and when cases cannot resolve on favorable terms for his clients, he is unafraid to take them to trial. He secured a complete defense jury verdict in federal court in Boston on multimillion-dollar environmental cost recovery claims after a six-week trial, then successfully defended the win before the First Circuit. The following year he tried a weeklong Clean Water Act case in Seattle federal court over allegations of unauthorized pollutant discharge into Washington state waterways, before the case settled for a small fraction of its face value. In both cases, Eric handled primary direct and cross examinations of all major causation expert witnesses.

In addition to his environmental work, Eric maintains an active pro bono practice in the areas of civil rights and landlord/tenant law. He is especially proud of longstanding service on B&D’s Pro Bono Committee, both as a former chair and now as the Committee’s liaison to B&D’s Boston office. He also served for many years as adjunct faculty at The George Washington University Law School, teaching trial and appellate advocacy. Prior to his legal practice, he served as a judicial law clerk at the Superior Court of the District of Columbia. He speaks and writes regularly on environmental litigation, including in Natural Resources & Environment, the journal of the ABA’s Section on Environment, Energy, and Resources (SEER).

“We do hard things.” 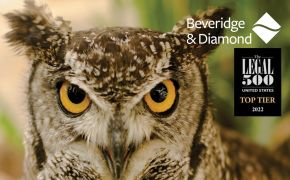